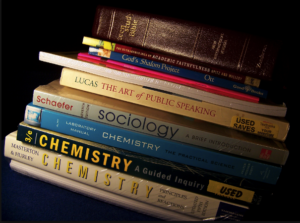 These books will cost a student more than my mortgage payment

Hello out there.  I spent the day helping some of my senior students work on college applications and essays.  I get to work with some of the smartest, driven kids…probably smarter and more driven than the majority of adults in this world.  Most of these kids have their lives mapped out ahead of them and know exactly what they want to do, while some just aren’t sure yet, which is perfectly fine.  My job is to help them figure some of it out and help them create a plan to get to where they want to be.

I met with a young lady today who is a straight A student, has taken advanced honors classes, AP classes, is the captain of the volleyball team, and participates in a number of other extracurricular activities.  She came into my office today looking extremely exhausted.  I asked her if everything was alright and she said yes but that she just needed to take a nap.  We had 30 minutes scheduled for our meeting and instead of discussing her college applications, I let the young lady lay her head on my desk and sleep.  I stepped out of the office and sat in the teacher’s lounge for the 30 minutes and of course my brain started churning.  Why is she so exhausted?  I’m assuming that it’s because she is involved with so many different activities and she has to study quite a bit for all of her advanced classes, she probably isn’t getting much sleep at night.

So that led my thoughts down the path of why is she doing this to herself?  Why doesn’t she give up an activity or two so she has time to get enough rest?  So after 25 minutes, I went back into the office and gently woke her up.  She was so grateful for me letting her sleep instead of spending the time talking.  I asked her if she had considered giving herself a break by letting some of her activities go, and she said that she wouldn’t be able to get a scholarship to the school of her choice if she didn’t have all of it on her resume.  She would love nothing but to give up some of her extracurricular activities but her parents can’t afford to pay for her to go to college and they are depending on her to get a full scholarship.

I asked her if she had considered student loans and her response was that she would spend the rest of her life paying them back and that she would rather work her butt of now to not have to be in debt for the majority of her life.

Why is it that our education system is so screwed up?  The U.S. is one of the worst countries when it comes to college funding.  Young adults are working themselves to death, missing out on friends and social interaction in order to beef up their resumes as much as possible so that they may win a scholarship.  Why isn’t college a right in this country for everyone?

I think about all the students who won’t get to go to college because it is too expensive and they can’t make the grades to get money.  It’s not their fault, but they’ll pay for it for the rest of their lives.  Most decent paying jobs won’t hire someone without a college education, so they’re forced to work minimum wage jobs and struggle to make ends meet.

Our country needs to be revamped in all different aspects, but education is the most important to me, and not just because I’m a school counselor.  If we want our country to be great 20-30 years from now, the youth of today are the ones who will make it that way, but the odds are stacked against them.

I’ll sign off for now, but I’m sure I will revisit this in a future post.  I wish there was a magic answer that would solve everything.  Until then, I’ll just keep advising my kids the best way I know how.