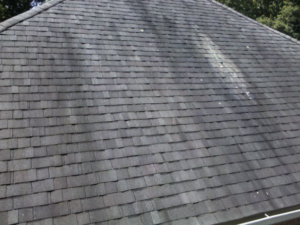 Our roof is leaking!

Hello again.  I had to take the day off from work because my wife went out of town and we had a major roof leak that needs to be repaired as soon as possible.  So I’m sitting here at the farm waiting on the roofing contractor to get here to tell me how bad the damage is.  I’m hoping that insurance will help us out on this, but you can’t ever count on things working out the way you hope, right?

In the past, I would have gotten very upset about a big problem like this and spent days stressing out over the money I would have to spend, the headache I’d have from dealing with it, and the inconvenience of it all.  I guess as I get older, though, I’ve been learning to just be thankful for the fact that we have this wonderful farm to live on, we have a roof over our heads (even if it’s leaking right now), we have great friends and family to support us, and we both have jobs that we love.

Of course, I also think a lot more about the people who don’t have roofs to live under, who don’t have money to spend on repairs, who don’t have a support system in place, or who don’t have a job because no one will hire them.  Did you know that in 2015, over 550,000 people were homeless in our country?  There’s no telling how many that has jumped to this year.

I visited Nashville last year and saw someone standing on pretty much every street corner in the city, selling a newspaper called The Contributor.  I bought one for $1 from one man and sat down in my hotel room to check it out.  The newspaper was full of articles, artwork, poetry, and some ads.  I decided to look up some more information about it just to see what it was all about.  Basically, it is a newspaper created by the homeless community.  They sign up with The Contributor to sell them across the city.  They have to pay $0.25 for each copy, sell them for $1, and get to keep the $0.75.  What a great program!  Not only are these people able to do something to help themselves, but they can actually make great money selling the paper if they put the work in and find the right spot.  Yeah, they’d have to sell a LOT of papers each day to add up to a decent amount of money, but Nashville is a decent sized city and has tons of tourists so I’m betting it’s pretty lucrative.

I have never seen something like this before.  I’ve either seen people sitting on a street corner with a sign just asking for money, or I’ve seen cities that do not allow homeless people.  In Nashville, there is a system in place to try and help people get out of the current situation they are in.  They are empowering people to work for a better life.  I read about one lady who sold the newspaper every day for 3 years until she had saved up enough money to buy herself a house and a car and was able to get a full time job that paid for her to go to school.

This story just gave me such a warm feeling inside.  Every town in America needs to have The Contributor, or something similar, to help out those less fortunate members of the community.  Some people end up being homeless because of choices they made, but some people end up in that situation by no fault of their own.  Either way, everyone should have the basic right to a place to live, no matter what they’ve done in their lives.  Hats off to The Contributor and the countless volunteers across the country who go out of their way to help the homeless community.

The roofer just showed up, so I have to run for now